We use cookies to make your experience better. To comply with the new e-Privacy directive, we need to ask for your consent to set the cookies. Learn more.

Categories: Product Info , In the News , focus on supply partners

Liot Kunststofftechnik have already successfully renovated several drinking water tanks in Zell am See in recent years. A total of 640 m² of HYDROCLICK sheets were expertly installed for the two chambers of an elevated tank. With this lining system, a lining made of PE80, tested for leak tightness, is installed in the existing water chamber.

The HYDROCLICK sheets with their non-porous and smooth surfaces ensure a safe and hygienic storage of drinking water. The spacer studs on the back serve as possible drainage for condensation and water ingress through the existing concrete structure. A pressure build-up between "old" construction and "new" lining can be avoided with this system. Water penetrating between the concrete wall and the back of the HYDROCLICK plate can be drained into the pump sump of the gate chamber. The entire floor area (incl. pump sump) and all wall areas are usually lined up to approx. 20 cm above the maximum water level.

As the pipe penetrations, which consisted of cast iron pipes, were also replaced by PE-HD pipes from AGRU, the drinking water in the tank only comes into contact with polyethylene. The material polyethylene fulfils the highest demands with regard to food hygiene, mechanical strength and durability. This is because the thermoplastic material is physiologically harmless, odourless, tasteless and free of plasticizers. As the easy-to-clean HYDROCLICK lining is also permanently corrosion-resistant and permanently resistant to chlorination up to 3 mg/l, it is the ideal system for the renovation of drinking water tanks.

Also the assembly is quick and safe with HYDROCLICK. The system consists of a sheet with the CLICK and spacer studs, which are formed in the extrusion-calendering process, and the CLICK profile, which is matched to the CLICK studs of the plate. In addition, HYDROCLICK scores with short installation times, a clean and safe assembly and permanently tight welded joints. Also the inspection of the drinking water tank is easier thanks to the blue surface.

In the first step, the CLICK strips are mechanically fixed in the wall and floor area of the container without extensive preparatory work. Then the HYDROCLICK sheets are clicked into place. By means of extrusion welding the plate joints are tightly welded. The distance between HYDROCLICK sheet and concrete wall allows air to circulate behind the system and prevents further corrosion of the concrete structure. For ventilation of the reservoir an air filter system with forced ventilation was installed, also with PE 100 pipes from AGRU. In this way, the drinking water always remains pure and condensation on the concrete girders of the roof structure is effectively prevented.

The cast iron pipes in the tank were replaced by AGRU PE 100 pipes.

The result is hygienic corrosion protection for many years. 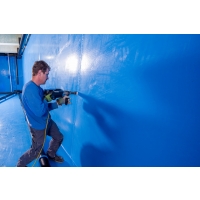 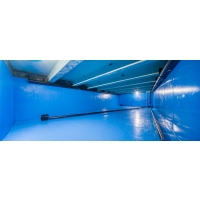