We use cookies to make your experience better. To comply with the new e-Privacy directive, we need to ask for your consent to set the cookies. Learn more.

Categories: Product Info , How to Guides , focus on supply partners

For 15 years, no contractor, maintenance company or water board had been able to find a repair method for a burst 400mm carbon steel underground water main.

That was until Sylmasta devised a successful live leak repair method which was effective inside an hour. 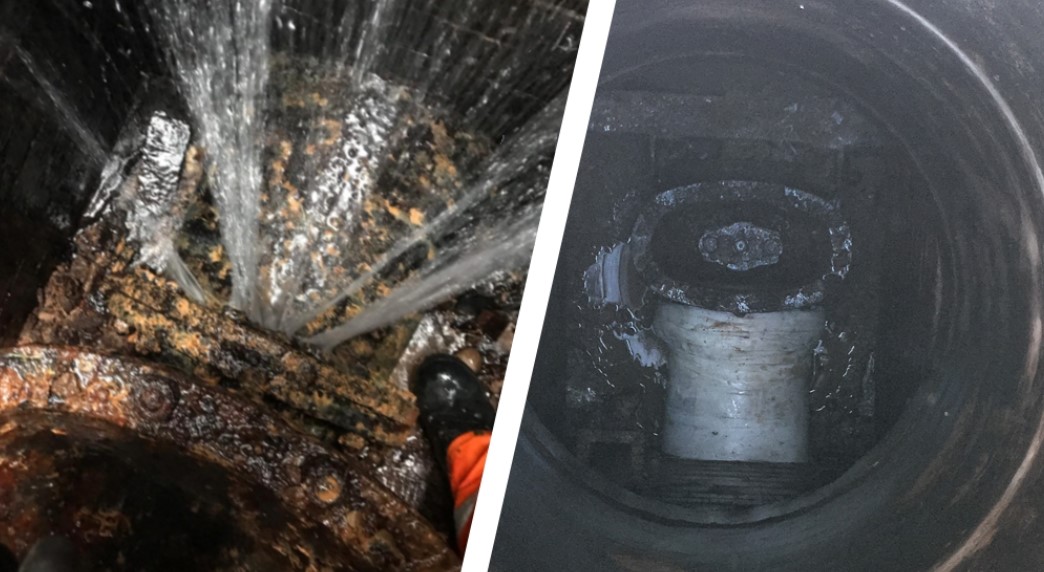 The large split across the diameter of the 400mm underground carbon steel water main had been considered unrepairable for 15 years for several reasons. The normal method for fixing a pipe on the underground water network would be to use a hefty pipe repair clamp, but that was not possible due to the severely confined space the main was located in.

Only a single contractor could access the water main at any one time and there was no room for any heavy equipment, including a clamp. This also made replacement impossible without digging up the area surrounding the water main.

The importance of the water main to the network meant that shutting off flow to carry out work was impractical. The only solution therefore was to find a way to carry out a live leak repair in a restricted space which could be effective even when water pressure could not be turned off – something which had proven elusive until Sylmasta were consulted.

Because of the complexity of the repair and the lack of space in which the contractor attempting to fix the burst water main had to work, Sylmasta recommended the use of multipleWrap and seal burst water main repair and Sylwrap HD pipe repair bandage.

It was decided to double wrap 400mm from the flange up the tapered pipe. Double wrapping compensated for the fact that the waterproof repair tape could not be stretched by its full 300%, which could have resulted in less effective fusion.

Applying more than the required number of tapes increased the pressure resistance of the repair. These additional rolls of Wrap & Seal bond to each other in the same way that a single tape fuses to form a solid rubber band. This repair method sealed the leak on the water main.

The Wrap & Seal was then overwrapped using several SylWrap HD 416 Pipe Repair Bandages. On a pipe 400mm in diameter, Sylmasta would normally have advised the use of an 866 Bandage but at 200mm wide by 20m long, there would have been no room to apply such a large wrap to the pipe.

Multiple 416 Bandages were used to cover the same repair area as an 866 Bandage, providing an impact resistant, protective layer to the Wrap & Seal, turning the repair permanent. Once cured, it was evident that the job had worked. Sylmasta had done in an hour what nobody else had managed in a decade-and-a-half by finding a method to repair the burst water main.

Wrap & Seal and SylWrap HD both have WRAS approval, meaning that they are safe to use on drinking water. With the water main in question connected to the public supply network, any repair materials had to meet the stringent criteria set out by WRAS so as not to pose a threat by contaminating water which could be consumed by humans.

The contractor carrying out the repair was delighted that after such a long period of time, they’d finally been able to offer a solution. They said afterwards: “The repair was a complete success, as we knew it would be. The information that Sylmasta provided greatly supported the project and more importantly, future projects.”

Sylmasta have since recommended that the contractor take stock of the SylWrap Pipe Repair Contractor Case. The Case contains enough products to enable a user to carry out up to six live leak pipe repairs, allowing the contractor to fix burst and leaking pipes in under 30 minutes as soon as problems are reported.

They will never have to wait 15 years to repair a leak again.